French architect and designer, Jean Prouvé (1902-1984), has been described as one of the most influential designers of the early modern design movement. Once quoted as saying “never design anything that cannot be made”, he combined engineering and design to produce a wide range of furniture and prefabricated architecture. An influential force among modern designers and constructionally-minded architects, we also take inspiration from his work here at RISE Design Studio. 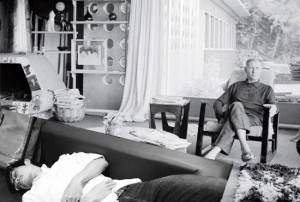 A apprenticeship in his teenage years with a Parisian metalsmith led Prouvé to become a master of of various metals. Opening his own workshop, Atelier Prouvé in Nancy, he became adept at working with wrought iron and steel at scale, creating numerous furniture designs and then opening his own factory. He fabricated lamps, chandeliers, and handrails, as well as the famous ‘La Chaise Inclinable’, the first reclining chair to use the technique of flat steel tubes, which allowed the chairs to be stacked.

He collaborated with some of the best-known French modern designers of the time, such as Le Corbusier and Charlotte Perriand, and his early successes led to the mass-production of his furniture (tables, chairs, shelves, etc.) for universities, hospitals, offices and schools. Tables made via an innovative method of folding sheet material were described as having “the perceived lightness of bridges and the presence of architecture”.

During World War II, Prouvé was commissioned to design prefabricated barracks for the French army. This allowed him to develop the structural system that became central to his later architectural designs. The roof and walls were supported by large A-shaped columns that a ridge beam could be slotted into.

In the 1950s, Prouvé devoted more and more of his time to the challenges of prefabricated architecture. His own house, which he designed as a prototype, is now considered a major development in prefab housing and, even today, engineers can’t always grasp the complexity of the bracing and support system that he set up intuitively in the structures he created.

His ‘demountable houses’ combined easy assembly and structural integrity that were used in a range of scenarios in a number of countries: durable housing for homeless war victims, manufacturers’ offices, and rural schools, to name a few.

The poetics of the technical object

Many of Prouvé’s furniture pieces are still manufactured by a Swiss furniture retailer, and his prefabricated houses remain preserved and regularly displayed. In 2008, Prouvé’s ‘Maison Tropicale’ (developed in the 1950s to address housing shortages in French colonies) was assembled in front of the Tate Modern in London to coincide with an exhibition of his work at the London Design Museum.

Since 2010, there has been reinvigorated interest in Prouvé’s prefabricated architecture. Many have been sold to collectors as installation art and, at a time when architects, planners and governments are becoming increasingly interested in addressing the issues associated with mass affordable housing, his ideas are being developed, adapted and modernised to suit modern day needs and increase their original material and economic efficiencies.