– Architecture with a social spin: an initiative for a school in Guatemala from Architecture Sans Frontieres.
– The ancient craft of hand-blown cylinder glass.
– Natural materials for the future: environmentally friendly engineered wood and hempcrete introducing hemp to traditional concrete techniques.
– Goldsmith Street: a new direction for social housing.

You can read the full version of the Sketchbook Chronicles issue N.003 here.

You can read the full version of the Sketchbook Chronicles issue N.002 here.

– A walk around Walmer Yard to boost our passion for architectural details.
– The Living Architecture initiative: Peter Zumthor’s villa introduced us to this idea by Alain de Botton from the School of Life.
– RISE Rusted Lamp: a wink to our Brexit Bunker.

You can read the full version of the Sketchbook Chronicles issue N.001 here.

We recently designed the critically acclaimed Oklava restaurant in Shoreditch, East London. Chef Selin Kiazim serves contemporary Turkish cuisine and was widely praised for her ‘pop-ups’ at Carousel London in November 2014 and before that a residency at Trip Kitchen in Haggerston. We worked with Selin and Oklava Director Laura Christie in 2015 to remodel the ground floor of the existing former four-storey mill building on Luke Street to house a new restaurant, bar and private dining facilities. 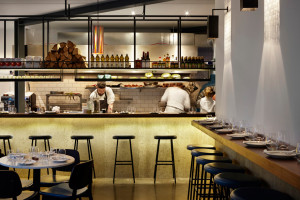 Oklava (the word in Turkish for a traditional rolling pin used to make bread, pastries and pides) is situated in the South Shoreditch Conservation Area. The materials, colour and configuration of the outside of the restaurant were designed to match the colour and shape of the existing windows on the upper floors and remain in keeping with the character of the building. Awnings over the external windows make the street a part of the restaurant and create a space for outdoor eating on warmer days.

The restaurant is focussed around communal eating and encouraging conversations about food by sharing dishes between diners. With this in mind, the unique, trapezoidal space has a central focus of an under-lit bar table, one of which allows diners to feel part of the drama of watching their meals being prepared as they socialise and sample the delicacies on offer. Movable tables are placed in the space between the bars, allowing for flexibility for different table configurations.

The concept was to create a contemporary, timeless aesthetic. A stone oven and a real charcoal grill, known in Turkish as a ‘mangal’, are the two key cooking elements of the open kitchen. The drama of the open kitchen is framed by a under-lit heavyweight concrete clad bar with walnut worktop and lightweight suspended Black Mild Steel shelving. On entering you are greeted with a Black Mild Steel screen designed to restrict views through reclaimed copper-framed windows housed within, creating a sense of intrigue of the activity beyond. The reflectivity of the polished concrete floor animates the restaurant, reflecting the light from the bespoke designed copper pendant and black mild steel wall lights.

Aiming to “pull Turkish cuisine out of the kebab shop and onto the London restaurant scene“, the restaurant has subtle lighting and an “aura of smart taste” (Tim Hayward, Financial Times). Bespoke lighting was designed, including Christie pendant lights made from brazed copper pipe to light up the movable tables. 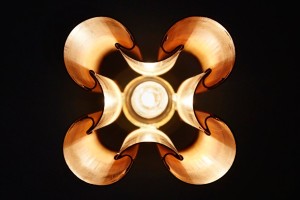 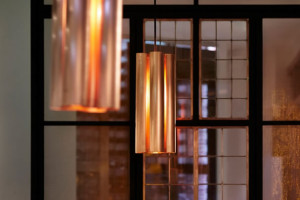 Read more about the remodelling of Oklava and see more images on the Oklava project page. We are currently working on other restaurant projects and welcome new enquiries.