Later this year, we will be opening a RISE Design Studio in Barcelona. We are excited about this, not least because we take a lot of inspiration from Spanish architecture in our work. Last month, we were very sad to hear the news that renowned Catalonian architect, Ricardo Bofill, had passed away at the age of 82. Bofill’s wide range of impressive buildings have influenced our projects and those of many others. He leaves a lasting legacy for us all. 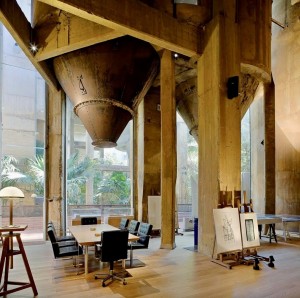 After an education in Spain and Switzerland, Bofill and a group of friends created ‘Ricardo Bofill Taller de Arquitectura’ in 1963 in the centre of Barcelona. From the outset, he worked in a multi-disciplinary environment, collaborating not only with engineers and other architects, but also artists and writers. This approach later developed into the holistic urban planning/design method that we are more familiar with today. His early projects were seen as exemplars of critical regionalism, with several viewed as a political reaction against the Francoist dictatorship in Spain at the time and a ‘shunning’ of architectural modernism.

In the 1970s, Bofill relocated to France, where his work echoed French traditions of classical architecture. His work in France culminated with the design of the new Antigone district in Montpellier, which combined large-scale industrialisation in precast concrete with classical forms. Described by Bofill himself as modern classicism, his projects like this led to his being referred to as one of the most significant postmodern architects in Europe.

One of the best-known projects delivered by Bofill and his firm is Walden 7, a modular block of 450 apartments built on the outskirts of Barcelona in 1975. Located on the site of a former cement factory, the modules of the 14-storey building are linked by footbridges and arranged around courtyards. The intention of this design was that the building serves the evolving needs of its residents. On the same site, Bofill built his family home and office, within the original cement factory (see the image above). His stylish and innovative renovation of the factory included a large, central meeting room and exhibition space (the Cathedral), with 10-metre high ceilings and features of the original factory intact in the surrounding décor.

A similarly innovative and impressive project is the ‘monumental’ apartment block Les Espaces d’Abraxas in eastern Paris. Featuring prefabricated stone, cement facades and reference to baroque architecture, one building includes a semi-circular structure that encloses an amphitheatre (that was used as a filming location in The Hunger Games).

From concrete to other materials

Bofill increasingly moved from working with concrete to glass and steel, while still featuring classical elements like columns in his projects. Notable projects from the 1980s include the extension of Barcelona airport before the 1992 Olympics and the National Theatre of Catalonia. His designs gradually lost the classical aspects yet retained his love of a highly formal sense of geometry such as in the Mohammed VI Polytechnic University in Morocco.

Over his lifetime, Bofill’s portfolio spanned a wide range of settings, from public buildings to transport infrastructure and urban design. Although Bofill has passed away, his firm in Barcelona continues under the co-leadership of his two sons and we will continue to take inspiration from his work while we establish our new studio in the city.