We recently attended a CPD tour organised by RIBA to the Ibstock brick factory in Chailey, near Lewes in Sussex. It was fascinating to see process of traditional stock brick manufacturing in one of the last remaining clamp-firing factories in Europe. We highly recommend a trip to the factory if you’re looking to source traditional stock bricks. This short post tells you a bit more about what we learned on our visit. 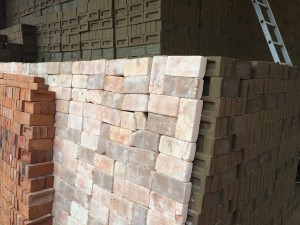 Clay products have been manufactured in Chailey for over 300 years, making it one of the oldest factories still in production in the UK. Its product range has changed over time and it now produces high quality, clamp-fired stock bricks and pavers with a range of colours and textures which give a unique charm. Bricks are known for being made in Chailey since the early 17th century. The current factory was built in 1946 in order to take advantage of modern production processes and the post-war building boom. The current owner, Ibstock Brick, acquired the site in 1996.

At Chailey, weald clay is extracted from an onsite quarry behind the factory during the summer months. There are three different seams of clay in the quarry, all with different drying and firing characteristics. Clay is dug from a stockpile each day and fed into the factory, delivering a set amount of clay each hour. Clay is mixed with sand and pulverised fly ash, which help with the drying process, and with a blend of coke breezes, which is the fuel that fires the bricks. All the material is fed into a wet pan, where it is mixed and ground together and water is added. The material is forced through grids in the floor of the wet pan and onto a conveyor, after which it falls between two counter-rotating drums, with a gap of only 3mm between them. This is so that a small but consistent grade size is achieved.

The material is then mixed in a double-shafted mixer where two shafts churn the mix to ensure and smooth and workable consistency. The mix is then taken to a kettle where it is stored before being turned into bricks in a molding machine which is capable of making 12,000 bricks per hour. The excess clay is struck off before a palette is dropped onto the bottom of the bricks. Bricks are piled in stillages which are then put into the driers, where the bricks are dried over a 23 hour period. There are five dryers and each one holds 24,192 bricks. The temperature in the driers is slowly increased up to 110 degrees and approximately 17 tonnes of water is removed from the bricks.

A clamp is ‘a carefully constructed stack of bricks’ in a large shed similar to a cowshed. Before going to the clamp, the dried bricks are inspected for defects and stacked into piles of 780 bricks (weighing 1.8 tonnes). These bricks are then laid on the floor of the clamp by hand by a setting team. Fire holes are built into the clamp before all the bricks are laid on top and the clamp is then covered in refractory insulation bricks and casing bricks which help to insulate the clamp during the firing process. Each clamp holds between 750,000 and 800,000 bricks and takes three weeks to build. 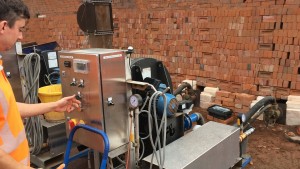 Gas burners are used to ignite the fuel which was mixed into the body of the bricks during the clay preparation process. The bricks fire at over 1000 degrees centigrade and only start to cool down when all of the fuel has burnt out. The entire firing cycle takes three weeks. When the bricks have cooled sufficiently, the bricks are packed up by hand onto pallets by an eight man team. There is a strict sorting code and the bricks are sorted according to their quality and colour and then hand sorted into packs of 370 bricks. It takes approximately two weeks for the team to pack up a clamp. 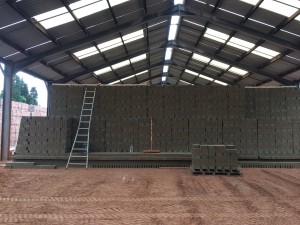 Chailey manufactures its range of distinctive bricks in both 65mm and 50 mm sizes and any of the bricks can be blended to create products to match up to existing brick work. Or, bespoke blends of bricks can be created. You can read more about the bricks made at Chailey on the Ibstock Brick website.