An aspect of our work that we are proud of is our ability to combine traditional architectural values with the use of modern materials. One architect who provides us with inspiration in this regard is Charles Correa, an Indian architect and urban planner who designed buildings that respect the local landscape while simultaneously meeting the practical needs of inhabitants. In 1984, RIBA declared Correa ‘India’s greatest architect’ – we look at some of his most important works and how they demonstrate his unique and deep-rooted understanding of Indian society and vernacular. 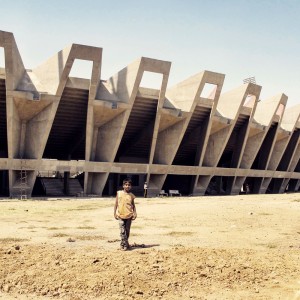 While studying architecture in the US, Correa was influenced by the use of striking concrete forms developed by Le Corbusier (a collaborator of Jean Prouvé, another architect that we draw inspiration from in our work). This, along with careful consideration of the Indian climate, drove many of Correa’s design decisions. For example, he recognised the potential for residents of a hot country to experience a better quality of life with access to outside living spaces, such as terraces and courtyards. He also created traditional, symmetrical spaces, often in ‘modules’ that could be scaled up to the desired size.

A famous example of this is in the Gandhi Memorial Museum in the Ashram, which was Correa’s first important work in private practice. Completing the project in 1963, he used 6mx6m modular units to reflect the simplicity of Gandhi’s life and allow for eventual expansion (the incremental nature of a living institution). Using a simple post and beam structure, brick columns support concrete channels and a wooden roof and the modules reflect the isotopy (like fractals) found in the decorative elements of Hindu temples.

From low income to luxury

Correa designed nearly 100 buildings in India, ranging from low-income housing to luxury condos and cultural buildings. In the late 1960s, when developing his career as an urban planner, he created New Bombay (Navi Mumbai). Preferring ‘quasi-rural’ housing to the high-rise solutions more typical of towns and cities, he designed the low-cost Belapur housing in Navi Mumbai in the 1980s. These dwellings included communal spaces and facilities to create a sense of community and emphasise the importance of the human scale.

His later works included cultural projects such as university buildings in Maharashtra and an arts complex in Jaipur. Even in these projects he continued to believe that buildings must respond to their surroundings and take into account the particular needs of those using them. The arts centre, for example, is a clever fusion of past and present, inspired by both the traditional Hindu system of architecture and the ancient beliefs of using geometric patterns and symmetry.

A pioneer in passive techniques

Correa discouraged the use of mechanical heating and cooling methods, instead preferring to use ‘smart shading’, intelligent building orientation and methods to enhance the heat absorption capacity of masonry. He was passionate about using different parts of the house at different times of the day and embraced the notion of ‘open-to-sky’ architecture with open walls and courtyard spaces.

Correa passed away in 2015 and will be remembered for the great respect and love he had for the cities he worked in. He founded the Urban Design Research Institute in Mumbai in 1984 to improve low-quality buildings. He saw cities as places of hope and worked hard to provide city dwellers with low cost shelter, reasonable living conditions and a sense of community.