Why the climate emergency is a crisis, and not just a concern:

The words ‘climate’ and ’emergency’ have only recently started to spring up in the news in relation to each other. Until now, we would talk of climate change, global warming, sea-level rise… so, what has changed, and what does it mean to be in the midst of a climate emergency? 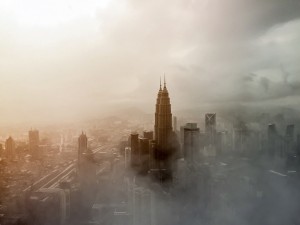 We have all seen the numbers before, but it is important to understand that the numbers are not just statistics. They are not predictions. They are the breakdown of our reality; unwanted guests that have already installed themselves in our living rooms… we are the ones who let them in and only we can tell them to leave. If we try to think about the numbers beyond their abstract measure, we may just be able to grasp the precarity of the times we live in:

– Loss of biodiversity fact: Our Living Planet Report 2018 reveals how there has been a 60% reduction in population sizes of wildlife worldwide since 1970. This does not just mean that we will see four instead of ten elephants on our next safari. This means that: a) entire groups of species have disappeared, forever; b) those who are still around are seeing their numbers reduce dramatically and struggling to keep up with reproduction rates, and paired with the loss of habitat this will likely lead to scenario “a” for many them at a vertiginous speed. However, this is not just about the effect these species have in the natural world. The plants and biome that the human race depends on are being affected just as much. Medicine and food are examples of resources that come in their majority from the natural world, and two of the things that we will witness being dramatically affected during our own lifespans. The consequences of their shortage will change our lives as we know them.

– Global warming fact: since the industrial revolution, the average temperature of the planet has increased almost 1ºC, and it is getting worse. The planet has natural cycles of heating and cooling, but these natural cycles happen slowly, which means that ecosystems can adapt to the changes. However, the exorbitant amounts of carbon dioxide that we have released into the environment since the industrial revolution have accelerated the Greenhouse Effect at an unprecedented speed. Among other things, this means that the natural atmospheric and oceanic currents are being disrupted and altering the natural climate that we knew as little as half a century ago. And the planet is not just getting warmer: hurricanes and cyclones are getting more violent, desertification is advancing and rendering miles of previously fertile lands sterile, and the poles are melting leading to a measurable rise of the sea-level. To put it into perspective, we are facing a situation in which our growing population will be left with less area to live in and less land to feed from… each of us can draw a conclusion of what this scenario may look like.

How it will affect the future

The consequences of any single factor that accounts for the climate emergency we are living will be far and wide. To make matters worse, climate change, global warming, sea-level rise, and loss of biodiversity do not act alone nor do they act on a single other element of their environments. Like any foreign agent introduced in an ecosystem, they interact with the ecosystem and with each other in such intricate ways that their full aftermath is often nearly impossible to predict. What we do know, however, is that the consequences will be bad. There is no sugar coating it. From floods to desertification, from arable land to drinkable water, the effects of the damage we are inflicting on the environment today will come back to haunt us on a scale that is difficult to come to terms with.

Why it is so crucial to act now

One of the main issues stopping real action from happening is that it can be hard to wrap our minds around this doomsday scenario from many of our perspectives. We can live in London, recycle our waste regularly, cycle to work and follow Greta Thunberg on Twitter and be at ease with ourselves. We can genuinely care about the environment and yet not fully understand the scope of the danger we are in as a species and as a planet… and that is why it is so important to act now; because, when the consequences are here, when there is no denying that we have gone too far, it will be too late to do something about it.

How architecture plays a role

That is why architects in the UK and around the world have been called to action and to unite in order to change our industry standards and respond to this climate emergency. It is a sad day in an architect’s career when they learn that the construction industry is responsible for almost 40% of the total energy-related carbon dioxide emitted to our environment. However, this also means that there is a lot of room for improvement and that real results can be achieved if we change the way we build across the board.

What is Architects Declare?

Architects Declare is a pledge to take on this responsibility and to be an agent for change within our industry. Along with almost 800 UK based architects, RISE Design Studio has committed to be an ambassador for the environment in the construction world and to contribute to a positive change in the way we conceive, construct, and deliver the built world. Together, we have the opportunity to make a real and positive impact in our world and our future through sustainable architecture, responsible building techniques, and environmental education at every stage of construction.

To find out more about Architects Declare and our commitment, you can visit the website at www.architectsdeclare.com. We hope you support us in our decision to tackle the climate emergency together.