“When we build we reveal our vision of the future.” These words embody David Lea’s approach to designing buildings that are in harmony with the natural world. Today, this has never been more important and here at RISE Design Studio we will continue to take inspiration from Lea’s work, long after hearing the sad news of his death earlier this year. 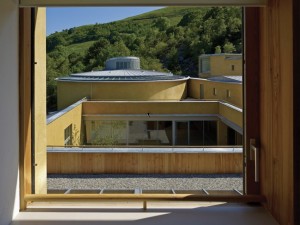 At the heart of Lea’s long career as an architect was his desire to create low-impact buildings. Many of his projects were built mainly from natural products, including timber, hempcrete, locally quarried stone and lime render. His last major project included an auditorium built with seven metre high walls of rammed earth. This now renowned project – the Wales Institute for Sustainable Education (WISE) in mid-Wales – comprises a range of accommodation and workshops, with pools of water, paved terraces and timber-slatted galleries interspersed throughout. This keeps the inside spaces in ‘constant dialogue’ with the outside world with an almost Japanese feel.

The WISE centre, like many of his other projects, were based on design principles that embrace creativity, minimise waste and retain an element of simplicity that complements the natural world. In his first important work – a sheltered housing scheme in Surrey – Lea implemented a system of easily built timber details so as to avoid any wasteful cutting. In later phases of the same project, he incorporated lime-rendered wall finishes, a method that he used in combination with locally quarried stone in his other work.

Growing concern for the natural world

As Lea progressed through his career, his concern for the natural world grew and he became increasingly restless with life in London. Relocating to Snowdonia in North Wales, he focused increasingly on rebuilding his own property and cultivating his land as part of the wider ‘back-to-the-earth’ movement.

While in Wales, and through his work at the WISE centre, he was able to showcase his use of hempcrete – a mixture of hemp and lime – as a sustainable alternative to concrete. Students and staff continue to experiment with this material at the Welsh School of Architecture and there is growing interest and use in hempcrete in a wide range of architecture, construction and scientific circles.

An activist at heart

Most inspirational is the way in which Lea instilled in his students a crucial need to think about the future that they build. His appreciation of changing light, combined with creativity, simplicity and responsibility towards the environment, was distilled into the minds of so many architects who now have the opportunity to learn from and carry on his important work.