– A walk around Walmer Yard to boost our passion for architectural details.
– The Living Architecture initiative: Peter Zumthor’s villa introduced us to this idea by Alain de Botton from the School of Life.
– RISE Rusted Lamp: a wink to our Brexit Bunker.

You can read the full version of the Sketchbook Chronicles issue N.001 here.

One of our most respected architects here at RISE Design Studio is Peter Zumthor, the renowned Swiss architect. Winner of the 2009 Pritzker Architecture Prize and the 2013 RIBA Royal Gold Medal, Zumthor’s sensuous materiality and attention to place has inspired several of our architecture and design projects. Although he has only built around 20 projects worldwide, his work is widely acclaimed and sought after. In this short post, we reflect on the career of Peter Zumthor, the projects that he has designed, and how he wishes his work to be experienced. 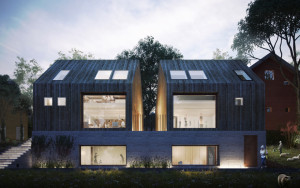 Peter Zumthor has been based in his studio, Atelier Peter Zumthor, since 1979. Situated in the Swiss mountain village of Haldenstein, Zumthor works with a small team of around 30 employees. In the past, Zumthor tried to protect himself from too many outside influences and gained a reputation in the media as being somewhat reclusive. Although he is quashing this image today, his practice remains somewhat rarefied as his clients are seen as ‘vehicles’ for him to realise his ideas and facilitate his works of art, rather than ‘clients’.

Zumthor is well-known for his preference for simple, unfinished materials. Perhaps the most well-known work of Zumthor is the Therme Vals in Switzerland, which was completed in 1996. Built over thermal springs, the building is a hotel and spa/baths which is created in the form of a cave or quarry-like structure. To complement and ‘fit-in’ with the surrounding environment, the baths are situated below a grass roof and partially buried in the hillside. The Valser Quartzite slabs used in the project were quarried locally and the respect for the stone became the inspiration for the design.

Zumthor is also celebrated for the Kunsthaus Bregenz, built in Austria in 1997. The museum’s minimalist design allows the space to be adapted to suit the art that is on display, redefining the relationship between art and architecture. Other notable works include the Swiss Pavilion at EXPO 2000 in Hanover (built of stacked beams of larch wood and Scots pine and held together by steel rods and springs) and the London Serpentine Gallery temporary summer pavilion in 2011 (at the heart of the pavilion was a specially created garden to allow the audience an emotional experience, with time to relax, observe and talk).

Sensation of the interior

The work of Peter Zumthor is all about how a person experiences the sensation of a building. With buildings ‘grown out of their place’, as if from the ground of forest, the orchestration of light and sound, as well as the touch and smell, are all vital, tactile qualities which create a minimalist feel. The focus on experience is embodied in the attention to detail paid to the interior of the building, on a par with the design of the exterior. When the exterior can ‘rule all’ in many contemporary architecture projects, this is a welcome reminder of the importance of considering the experience of detail and looking at things closely, something that we are currently researching in our own work.