Recycling or converting buildings came naturally to Italian-born Brazilian architect, Lina Bo Bardi. Inspired by the use and reuse of basic materials, she devoted her working life to engaging with every facet of culture and designing ‘people-friendly’ buildings. Described as “the most underrated architect of the 20th century”, it is pleasing to see her finally receive the attention she deserves. We take inspiration from Lina Bo Bardi here at RISE Design Studio, particularly her respect for authentic objects and how to preserve and celebrate them in the home. 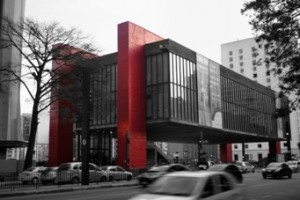 Buildings flowing with the natural environment

In 1951, Bo Bardi created the ‘Casa de Vidrio’ in the rainforest surrounding São Paulo. An early example of the use of reinforced concrete in domestic architecture, she found a Brazilian context for the Italian modernism she was trained in. The landscape ‘flows’ underneath the building and the main living area is almost wholly open, apart from a courtyard that allows the trees in the garden to grow up into the heart of the house (perhaps a source of inspiration for Sverre Fehn’s Nordic pavilion). This celebration of the local environment is a theme that runs through her work.

Bo Bardi’s designs were used in the the Solar do Unhão cultural centre in Salvador, and the Museum of Art, the Teatro Oficina, and Centro de Lazer Fábrica de Pompéia in São Paulo. In what she termed ‘poor architecture’, she sought to design public spaces that embodied a simple form of monumental architecture. The São Paulo Museum of Art is formed from ‘raw and efficient’ pre-stressed concrete, allowing unobstructed views to the lower-lying parts of the city.

She expertly restored buildings in a manner which neither pandered to nostalgia nor ignored context – the restoration of a 17th century sugar mill into the Solar do Unhão left the colonial exterior intact, with a modern staircase added. This reflected her belief that a museum should be a place for education – an active site of knowledge rather than a mausoleum of the past.

When she was commissioned in the 1980s to turn a burnt out office building into a theatre, she designed the new space almost completely out of painted scaffolding. The intense theatre space is designed to make the members of the audience feel as if they are engaged with the act on the stage.

Simplicity and the historical present

Lina Bo Bardi also designed furniture and she often used plywood and native Brazilian woods in her design. Wanting each object to display its own ‘natural logic’, her designs embodied simplicity and reduction and rawness of material.

Bo Bardi’s work has become much more widely acknowledged in recent years and support has grown for the proper preservation of her buildings. In a lecture at the University of São Paulo in 1989, she was asked to describe her ideas for the preservation of historic buildings. She replied that she sees no such thing as ‘the past’ in architectural practice. Whatever still exists today is what she termed ‘the historical present’ – you have to preserve the typical features and characteristics of a time that is part of our human heritage.