We are researching a method of designing our projects ‘in totality’, an approach developed by Danish architect and designer Arne Jacobsen. Using this concept, we plan to research and design a range of ‘imperfect’ yet universally appealing products that would be handmade in London using raw materials like wood, metals and glass. Initial ideas include door handles, threshold details, light fittings, furniture, light switch plates and knobs, and plug sockets. As we undertake this exciting piece of research, this short blog post explains Arne Jacobsen’s approach in some more detail and reflects on how his unique Scandinavian architectural tradition has had a profound impact on international architecture. 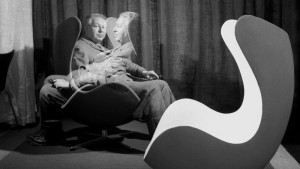 Arne Jacobsen (1902-1971) designed numerous notable buildings of the 20th century, ranging from theatres, sports halls and schools, to hotels, the Danish National Bank and St Catherine’s College, Oxford. Although first and foremost an architect, he is arguably most remembered since his death in 1971 as an interior design innovator, thanks to his prolific and diverse designs. He created a range of modernist chairs in the 1950s that are still widely seen today (examples include the ant chair, the tongue chair, the swan chair and the egg chair), and his collaboration in the late 1960s with VOLA led to the design of a customisable system of plumbing fittings meant for both kitchen and bathroom. The mechanical parts of the VOLA series are all hidden, leaving only the spout and handle visible to the user – a completely new concept at the time. This design is now recognised and found across the world and in many prestigious buildings such as the German Reichstag in Berlin, the Scottish Parliament in Edinburgh and the Concertgebouw in Amsterdam. In conjunction with specific building projects, he also designed a wide assortment of textiles, lighting fixtures, door handles, cutlery, tableware, clocks and other accessories that were awarded many prestigious accolades and can now be seen in design museums around the world.

The goal of totality

Arne Jacobsen’s goal was totality. He strived to create total concepts, whereby everything was designed with a common thread between the building, the furniture and other interior décor so that all parts were ‘in harmony’. As his portfolio of projects completed in this way grew, the quality of the products he designed became so highly regarded that, although they were developed for specific building projects, they had such universal application and appeal that they became part of standard production. The VOLA design is still popular today, inspiring bathroom and kitchen designs that ‘clean-up’ the aesthetics of these rooms.

As we continue to research and design our own range of interior design products that use local materials and complement our architectural projects, we will be inspired by the timeless, holistic approach that Jacobsen used so successfully.